Goings on in the Hudson River

Last night, there was quite a commotion on the Hudson River.

The sweltering temperature had dropped drastically, the Hudson River had whitecaps and it was eerily quiet.

But not for long.

About fifteen boats, some big, some small, some official looking, some not showed up in my view.

The boats were traveling in a circle for a bit. At first it looked like it could have been a search and rescue mission. There were lots of horns honking at various intervals.

Eventually the boats made their way up the river in a procession. They did some more honking.

Then the boats started to go their separate ways.

I guess that was in preparation for this. 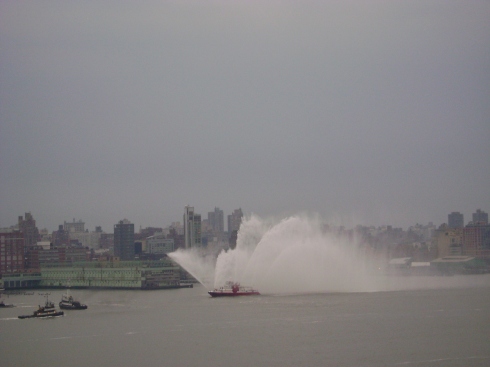 As you can see here, a boat with loads of water starting spewing water everywhere.

The boats kept moving farther and farther away from the water spewing boat.

And then it was done.

A Google News search shows nothing. My neighbor, who also watched, thought it might be a funeral procession for someone in the maritime industry.

If it was, I hope he or she rests in peace.

If it wasn’t, I’m very curious. I’ve seen a lot of stuff happen on the river, but that whole show was a first.

This entry was posted on Friday, June 10th, 2011 at 8:00 pm and posted in apartment living, in and around NYC, observations. You can follow any responses to this entry through the RSS 2.0 feed.
« Published…for real!
Translation Trouble »