One of the great things about traveling overseas is discovering things before they come big in the States. Or, seeing something in the States that later gets introduced overseas.

While traveling throughout Croatia in September 2010, the boyfriend and I found ourselves in Split (ok, I had planned it that way). We had started our journey in Dubrovnik and were working our way north to fly home through Zagreb. Prior to arriving in Split we had already traveled on the Adriatic Sea on…

a Jadrolinija ferry (seen in the distance in this photo) that was like a no-frills cruise ship. 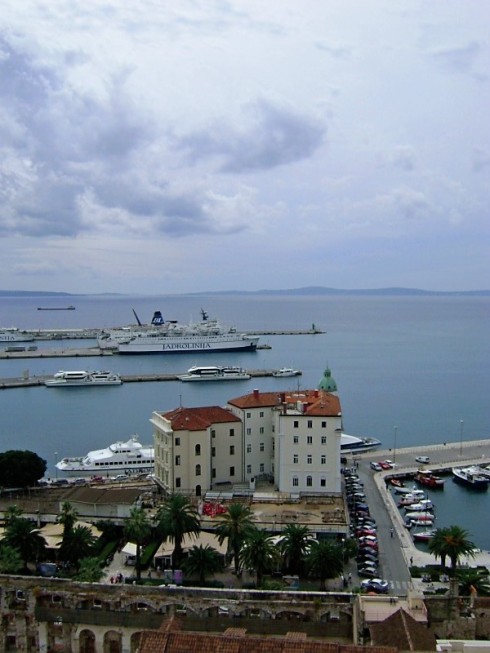 Now that we were heading inland, the boyfriend and I wanted to rent a car to get from Split to Zagreb. The Split-Zagreb leg could have been done by bus or train but we wanted to stop at Plitvice Lakes in the mountains where public transportation was spotty at best.

In fact, we were told that if at all possible, to avoid taking buses around that part of the country because service was unreliable, and missing one bus could leave you stranded for a day or two. If we did get stranded, there would be no car rental agencies in the Plitvice Lakes area so hitchhiking to Zagreb would be the only option. That option was immediately nixed by my boyfriend, so a rental car it would be.

We had arrived in Split (via the Krilo Jet catamaran) from the island of Hvar around 8am. We ate breakfast and before setting out to explore Split, we had to secure a car for later that afternoon. Mind you:

1 – we hadn’t made any reservations and this was only the start of shoulder season
2 – we would need to return it in Zagreb, making this a one-way rental – more difficult to secure at this time of year we were told
3 – we wanted to leave town around 4pm.

Either way, the world wasn’t going to end if we weren’t able to rent a car. We could have spent the night in Split to wait for a car, or rerouted ourselves for the last few days of our vacation. If it was that big of a deal, we would have made a reservation. This is why it’s called traveling on the fly! It’s fun, and it allows room for spontaneity. You just need to realize your ‘ideal’ plan may not come to fruition. But if it does (and this time for us it did), it feels like quite an accomplishment. Sometimes you have absolutely no control over the situation and you really just need to go with it.

Anyway, we wanted to try to see if we would be able to secure a car, so off we went. We showed up, unannounced, at a rental agency, expecting that this would be easy. After all it was the off-season, and we didn’t need it until later that afternoon. Um. Not so easy.

Our fifth, and final, stop happened to be the only rental car agency that had an available car, later that day, that could be used as a one-way rental. We signed the paperwork and said we’d be back in a few hours to pick up our wheels.

Fast forward. We return to the rental agency and the guy told us that he had a few cars from various carmakers on his lot, but thought it would be amusing to give his only American car, to the Americans.

I was slightly saddened that we wouldn’t get a European car. I had grandiose dreams of speeding down Croatian highways in a Fiat convertible because when in Rome, but whatever. We were lucky to even have a car at this point.

So we settled into our Chevy Cruze, which neither of us had ever heard of before, waved back to the guy who got us a car, and headed out on the highways of Croatia.

Months later, we see prominent billboard advertising for the Chevy Cruze in Times Square, and elsewhere.

We had enjoyed our ride, and clearly others, here in the States do too – as the Cruze was the best-selling compact car in the US in April 2011.

And we tried it first.

This entry was posted on Sunday, June 12th, 2011 at 7:00 am and tagged with croatia and posted in travel, travelogues. You can follow any responses to this entry through the RSS 2.0 feed.
« Translation Trouble
Bear with Me »

One response to “Cruze-ing in Croatia”