Upon landing in Ushuaia, we took a cab right to our bed and breakfast. Our cab driver’s only English was ‘Bill Gates.’ As soon as we got in the cab, he asked us where we were from.

As soon as he learned that we were Americans, he asked us if we knew Bill Gates.

Sidenote: I was not sure if he was asking us if we knew Bill Gates personally or if we knew of Bill Gates. I’m going to chalk it up to my own translation issues because yes to the latter, no to the former.

Our cab driver proceeded to tell us, very excitedly, that Bill Gates has a research ship docked in the harbor. He did not hesitate to show us the ship – as he pointed in one direction and we were going around a roundabout in another direction! 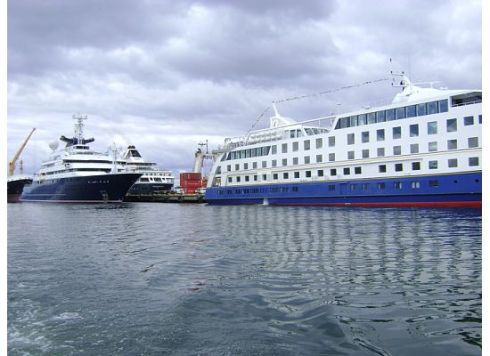 This entry was posted on Saturday, November 5th, 2011 at 8:00 am and tagged with argentina and posted in travelogues. You can follow any responses to this entry through the RSS 2.0 feed.
« thisclose to Antarctica
Remote Ushuaia »