As soon as I woke up, I checked on the computer in our B&B what the weather in New York looked like…just to see if there was a chance that our flight home that night would be delayed, or cancelled, due to weather. Let it be known that I only wanted it to be delayed or cancelled if we had enough time to enjoy the country, not to hang around waiting at the airport.

Clear skies. Damn. Cold weather. Damn. It would be snowing when we landed but the weather was just not bad enough to delay or cancel our flight.

So our last day it would be.

We had about 7 hours and we we working from a last minute list of things we hadn’t yet seen or done!

I collect magnets from my travels and I still hadn’t bought  a BsAs magnet so that was one of the goals for the day. We had actually brought two bags, and checked one on the way down. This is unheard of for me, as I believe checked luggage is potentially lost luggage. But I planned on shopping so we had only filled the checked bag halfway to start the trip. I am proud to report I did a really good job of filling that suitcase with purchases along the way!

Back to our day, and our to do list. Because taxis are very inexpensive, we agreed that would be our mode of transport around town for the day – aside from one subway ride…we’ll get to that.

It is unbelievable how elaborate this cemetery was.

Something that was weird to me was seeing people take photos WITH themselves in and around the cemetery. Yes, we took photos in the cemetery too, but not posing with the tombs and mausoleums. I don’t know, for some reason it seemed sacrilegious to me. Not surprisingly there were tons of stalls with people selling their wares outside the cemetery. Also a little weird, but at least the shops weren’t inside the cemetery.

Next stop – La Boca. I had read and heard that this, and the next hood, are must sees on Sundays. I also heard not so good things about this area. There’s one main street, Caminito and all the locals we had met throughout our trip told us not to stray from this main area.

I had also read stories about tourists getting robbed in broad daylight. Knowing that anything can happen anywhere, but armed with the information that this area could be sketchy, we had our guard up. With only a backpack (no pocketbooks, fanny packs, cameras around our necks or fancy jewelry) we didn’t stick out (too much) as a target. With the exception of people selling goods, nearly everyone on the street was a tourist. We were aware of our surroundings but did not want to be deterred from exploring.

This photo is the very start of Caminito where the taxis drop off the tourists, as the street is pedestrian only. The colored buildings continue all through the area. Men and women dressed in their fancy tango attire and ask for money. Once they make enough, they would start to tango on the street. It was a very loud, very bright and bustling place. Oh, and very touristy.

Spent about an hour strolling the brightly colored and popular neighborhood stepping in and out of shops. One thing on our to do list was to buy stamps. Because I wasn’t going to be in BsAs to pick up the copy of the birth certificate on the specified date, one of the guys from our B&B was going to do it for me. I wanted to make this as easy as possible for him so I needed to get an envelope, marker and stamps. At the start of our day, we popped into a stationery store getting the envelope and marker which was easy. It was finding stamps that was going to prove to be difficult, because it was Sunday!

In Caminito we found a shop but no one spoke English so it took a few times to tell them it wasn’t for a postcard. I think I bought about $10USD worth of stamps and called it a day. I hope the letter arrives because it’s literally going to be a sheet of paper. $10USD worth of stamps should be enough to ensure it gets to the States!

With stamps in our hand, jumped back in a cab and headed to our next stop – San Telmo! This is another must do on a Sunday because of its famous flea market. By now it’s the heat of the day, there are a tremendous number of people, stalls and music. It’s overwhelming every single one of my senses. Here’s a snapshot where the crowds lessened. At it’s most crowded you couldn’t even take out a camera you were jam packed against people and stalls.

It was a little hectic for me, and my fear of bed bugs, but for the boyfriend, who hates crowds, heat and shopping, it was probably close to hell. Around now we agreed we were hungry and let’s just get to a restaurant. Should be easy. There were people sitting outside at cafes that we literally had to climb over. This is not how I imagine eating lunch – anywhere. Ever.

So we go off the beaten path by a few blocks and find a small restaurant. It’s packed but there’s an open table and we were in no way going to have people climbing over us while we ate. Worst service we experienced on our entire trip. It was like we put the waiter out for even being there. Maybe he was just as frustrated as us because of the crowds outside. The pizza was good but this stop served the purpose of us both refueling and getting some air conditioning before facing the crowds again. After we ate we both agreed to go directly to our next stop.

This was a pedestrian only area and en route to get back, we were on a mission to find this gift my sister had asked for. On the way to get to the stall that had the item, there was a homeless and/or drunk and/or hoodlum causing trouble. Before the cops came we were only a few feet from him. So I ducked into a hat store and waited until the cops got him out of there. The hat store was adorable. I was hot, confused and distracted and passed on the hat. Note to self: when we got in the cab, I did the math, and though it would have been a little pricy, I should have gotten it. Super cute. Damn. There’s one of the reasons to go back!

Did get my sister the gift she wanted and stopped in another store where I bought a super cute dress. While the boyfriend probably didn’t like the shopping factor, I know for certain he liked that the store was empty (we were two of the four customers) along with the air conditioning.

Hopped in yet another cab and headed to the A line. We had taken the subte (subway) earlier on the trip but the A train is the oldest line in Argentina…and in the Southern Hemisphere. Was told to make sure we rode this by several people. Really cool. You actually had to open the train doors yourself! They have restored this train so incredibly. In fact, when the line was built, not too many people knew how to read, so each station has colored tiles, marking stops with colors instead of words. There were even little chandeliers inside the cars and windows that opened and closed properly as opposed to little air vents in the NYC subway.

Missed our stop because we were enjoying the details of the old train. When we decided to get off we just had to walk a few blocks back to our next destination – Cafe Tortoni, a notable and very touristy cafe, for our last coffee in Argentina. Yep, even I, a coffee hater, drank coffee in Argentina, for the caffeine more than anything! Though I should mention, at Cafe Tortoni, and the hot summer day, I enjoyed a lovely glass of chocolate milk. Boyfriend had coffee.

Before heading back to the B&B to grab our stuff, I had read about this metal flower. So we got in a cab and I asked the driver to take us there. Boyfriend was stressed because this was an unscheduled stop but I knew he was giving us so much time to get to the airport and then at the airport that I took it upon myself to squeeze in one more thing. There is a huge metal flower structure that opens and closes at the start and end of each day. 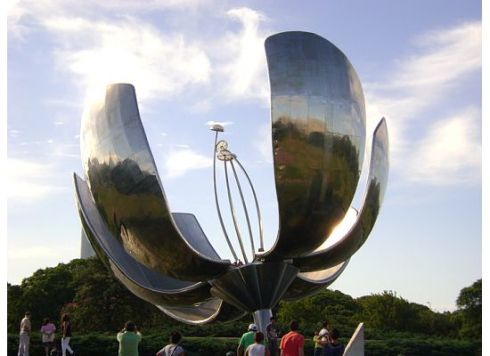 Once in this park, I really didn’t want to leave because there were beach chairs and everyone was laying out in the grass. 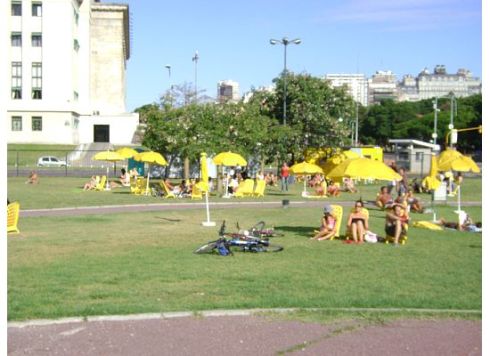 Knowing that winter awaited us at home, I was in absolutely no rush to leave. And for the minute or so he didn’t check his watch, I think the boyfriend didn’t want to leave either.

Like I do every time we leave a place I love, I had tears in my eyes yet hope that our flight could be cancelled.

Once we arrived at the airport it was time to put plan B into action. I asked the agent about any cancellations or the chance we could get bumped. When both of those questions were answered with “I can pretty much guarantee you will not get bumped” I asked about an upgrade. For $500 more, we could have gotten upgraded. Needless to say, we rode it out in coach.

Had some interesting issues in duty-free with $50USD of alfajores (cookie cakes). Once we made the purchase and realized our signals got majorly crossed, we returned $25 of the alfajores and exchanged it for a nice $25USD bottle of Argentine Malbec. Much better.

In the airport we grabbed a few more bags of tomato basil and ham flavored potato chips. (We realized when we got home, the ham was actually steak and I can say for certain, those were gross.)

At the last minute we were confirmed in two seats (a window and an aisle) rather than in two of the five seats in the middle of the plane. I am no claustrophobic but that could make me one.

Boarded the plane and shortly after we were back in the air headed home. Both ways I slept as we crossed the equator, which I was bummed about. Sure nothing feels differently but it would have been cool, especially since this was my first time crossing it. And it won’t be my last.

Argentina, don’t cry for me. I fell in love with you and I will be back!

This entry was posted on Sunday, February 20th, 2011 at 11:30 pm and tagged with argentina and posted in observations, shopping, travel, travelogues. You can follow any responses to this entry through the RSS 2.0 feed.
« Tigre: No Lions, Tigers and Bears – Just a Pup
Welcome Home »