Less than a week after my arrival in South America, I would get to celebrate my first holiday in Uruguay — Dia de Noquis! (Day of the Gnocchi!) 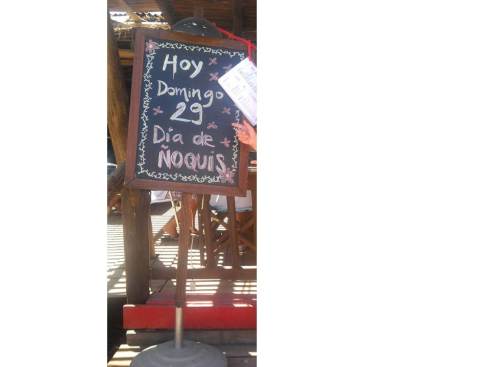 By the time the end of the month rolled around no one had much money left. Gnocchi was cheap to make since the only ingredients needed were flour, potato and eggs. Remember that the next time you order a $30USD plate in New York City. Tradition says to place money under your plate for good luck the following month.

And because Uruguayans love a good holiday, there you have it. Dia de noquis! Since I happened to be in La Pedrera on the 29th of January, I happily partook and enjoyed my noquis y vino for lunch with Romina and Mariela.

This entry was posted on Friday, December 7th, 2012 at 1:28 pm and tagged with uruguay and posted in beach, holidays. You can follow any responses to this entry through the RSS 2.0 feed.
« Just a Sunday in January…on the Beach
An Unexpected Offer, Vague Advice and a Surprise! »