Another stop…Antigua Bodega Giol. It had once been one of the largest wineries in the world. Now, it was more a tourist attraction with a pretty informative tour and big barrels with a chance to explore from above (the barrels) and inside (the barrels).

My new friend Rafael said it was a must see on our vineyard tour. It was the most unusual winery I had seen, and you can’t argue that the barrels are among the biggest on a public tour. 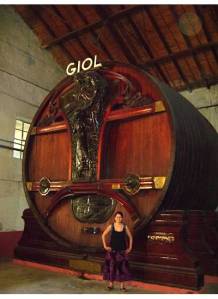 This was a pretty rare opportunity to really take in (from above) how much wine this winery produced in its heyday.

Want to squeeze inside the “doorway” in the metal barrels and explore inside? I am not afraid of heights but I was concerned about getting stuck in the “doorway.” It was a little higher off the ground and much narrower than it looks. I did stick my head inside for a quick peek. This is Rafael looking out from inside the barrel.

And what winery tour leaves you hanging? Not this one.

Upon leaving, you won’t miss the bull. Legend has it that by rubbing the bull’s balls, you’ll find good luck. 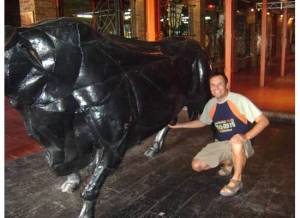 This entry was posted on Wednesday, January 28th, 2015 at 8:00 am and tagged with argentina and posted in career break, wine. You can follow any responses to this entry through the RSS 2.0 feed.
« Trivento…means three winds
Sitting inside would turn out to be, by far, the least of my problems that night »